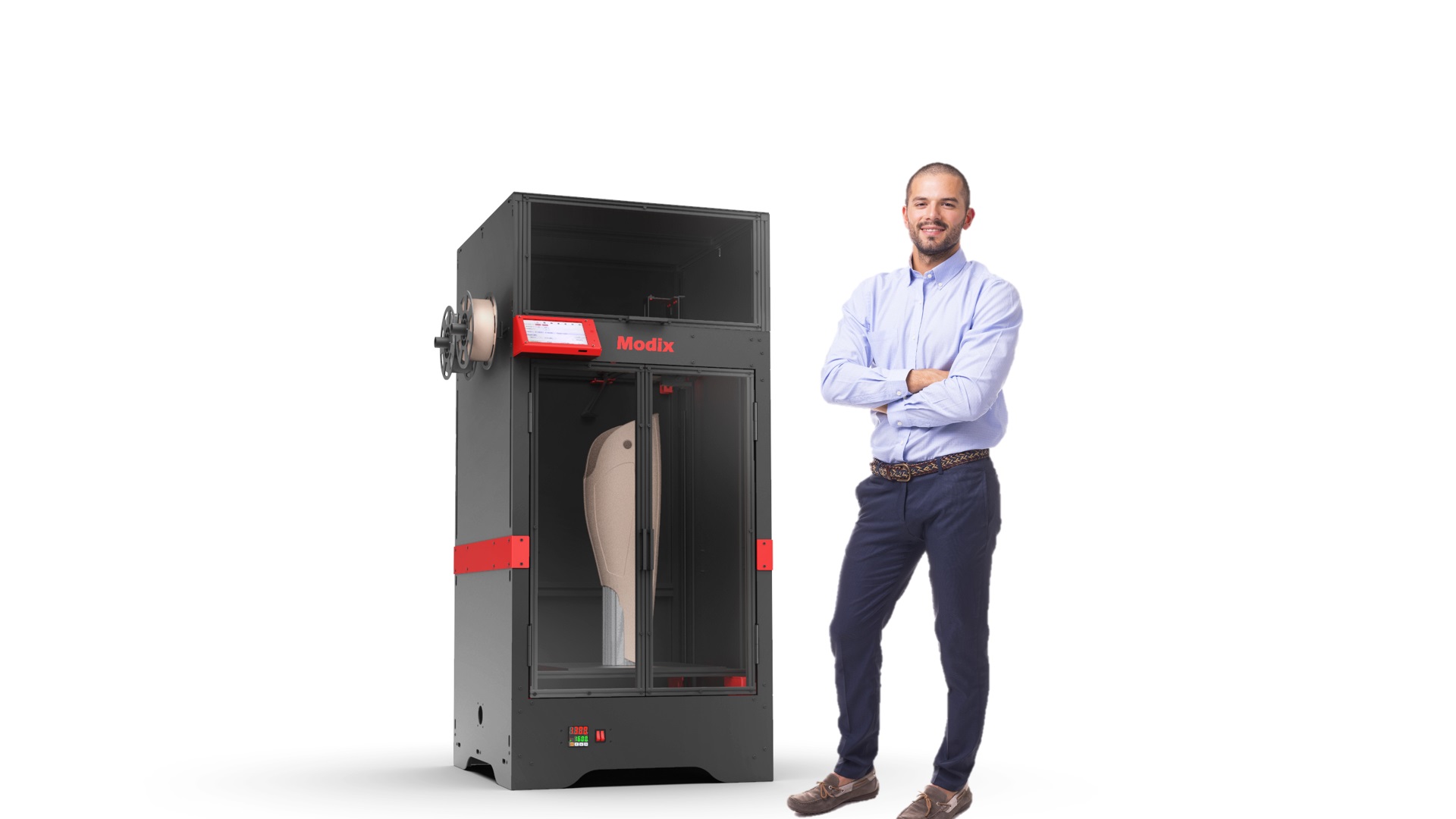 Modern 3D printers can create large objects for businesses and private users. If the size of the print bed is not big enough, you can print parts of the object that you need and assemble them. The best thing is that you don’t need to pay a fortune to install such a printer in your workshop. For just a couple of thousands of dollars, you can get a powerful and versatile unit that you can put on your desktop. You can rely on it to print objects for your personal use or sale.

3D printing allows you to experiment with various modifications of products that you’re planning to sell. It’s the most flexible and affordable way of identifying the ideal types of products that you can put into full-scale industrial production. In this article, we’ll share the names and the most important characteristics of six large 3D printers with an affordable price tag. All of them are highly reliable, provide a consistently high quality of print and receive positive customer reviews. As an additional bonus, some of them are easily customizable.

The answer to the question “What’s the best large 3D printer?” depends on what you mean by saying “the best” and “large”. In this article, we’ll consider printers with a build area of more than 300 x 300 mm.

If “the best” is the same as “the most affordable yet never compromising on quality”, then, you might consider Creality Ender 5 Plus. It has a static build plate and a larger than average build volume. You can use it without any modifications — but if you prefer to customize it, you should be able to do so rather easily.

For some users, “the best” is synonymous with “the largest build volume”. Is 600 x 600 x 660 mm big enough for you? Then, you should pay attention to Modix Big60 V3. Its duet 2 Wi-Fi-enabled mainboard is paired to a Duet touchscreen controller, providing access to macros and other live-print controls. It features an E3D Volcano hot end for speedy printing. On the flipside, this machine doesn’t come pre-assembled and if you need an enclosure, you should be ready to pay extra for that. Yet given the Modix Big60 V3 price tag of less than $4,000, that’s a bargain!

If “the best” means “a hidden gem” for you, then, you should turn your eyes to Vivedino. This brand was previously known as Formbot. Its Troodon CoreXY 3D printer is based on the Voron project’s highly configurable CoreXY 3D. It features a 400 x 400 x 500 mm build volume and a Wi-Fi-enabled mainboard. The unit is ready to run right out of the box and can boast a very decent quality of printing.

Here are the names and the most important characteristics of the units that we’ll be talking about in this article:

We deliberately include only those 3D printers in this review that cost less than $5,000. Of course, you can find pricier versions on the market. But the target audience of the costliest and the most powerful models are enterprises and not consumers who would like to print objects in their houses or garages.

If you have never tried your hand at large-size 3D printing before, you’ll find a helpful guide at the end of this article. There, we’ll mention the biggest challenges of the process and the parameters that you should pay primary attention to when choosing a printer.

The Creality brand releases budget-friendly high-performing 3D printers. Ender 5 Plus features a stationary print bed, which is very important for a large unit, as well as filament out detection and an auto bed-leveling probe (BLTouch). You’ll need to assemble the machine yourself. You can start using it without any customization since its stock configuration is good enough. In the future, however, you might want to introduce certain improvements because the two stepper motors used to drive the Z-axis might drift, tilting the bed. Plus, the routing for the cabling and tubing for filament might be enhanced to avoid issues and minimize the risk of dangling into the printing area.

This 3D printer might be not the best option for beginners. It might take you too much time and effort to figure out how it works and get accustomed to it. Nevertheless, we include it in our review because experienced users can’t stop praising the X5SA-500 Pro for its following benefits:

The $800 price tag seems very affordable for a printer with a 500 x 500 x 600 mm build plate. And of course, you can customize the unit after the purchase to better meet your needs.

This manufacturer was formerly known as Formbot. Its range of large-format desktop 3D printers is small but worthy. The Troodon model is available in two sizes: 300 x 300 x 400 mm or 400 x 400 x 500 mm. It is based on an open-source Voron CoreXY 3D printer design. That is a sturdy and fast-working unit that relies on a large amount of 3D printed parts and name-brand parts. Troodon uses stamped and milled blocks as well as analogous clones for the mainboard, hot end and other parts.

It comes pre-assembled and you can start using it immediately after you unpack it. Customers value Troodon for its following standard features:

Its print bed remains firmly fixed in place, with the entire CoreXY gantry moving on a belted Z-axis.

It’s the biggest unit on our list. Given its size, its price tag seems rather reasonable. Customers especially praise its following features:

If needed, you can upgrade the unit so that it will feature two extruders and will be able to print faster.

The biggest shortcoming of this model consists in the fact that you’ll need to assemble it yourself. Besides, its stock configuration features no enclosure — if you need it, you should be ready to pay around $700 for an add-on.

gCreate is a startup based in New York City. It has begun to produce large-format 3D printers only recently, so you might have heard little about it. The gMax2 is one of the tallest machines in our article. On the Internet, you can find a wealth of support material for it. The machine is compatible with dozens of filament settings, which comes in especially handy for those who love to experiment.

Some of the most important competitive benefits of this model are the mesh bed-leveling probe and the hot end that is a genuine E3D V6. However, there is a meaningful disadvantage as well: the machine belongs to the category of “bed slingers”. This type of mechanical arrangement is a common problem for large-format printing. To solve it, the gMax 2 developers introduced dual Hiwin linear rails. These rails support the print bed carriage that should facilitate the process of slinging the hefty mass of the print bed back and forth in the Y-axis.

The most popular official upgrades for this model include the following features:

If you can’t afford these modifications from the onset or don’t need them immediately, you should nevertheless appreciate the capabilities of the basic gMax 2.

It’s the tallest printer on our list — and at the same time the smallest model from its manufacturer’s lineup. You’ll need to assemble it yourself, which will require a certain time, effort and skills.

Here are the most noteworthy features of this 3D printer:

You can easily fine-tune the configuration of Modix Big-40 to customize it to your needs. For instance, you might want to install a high-temperature heater cartridge that reaches 500° Celsius. If you need a bigger 3D printer with similar characteristics, you might want to consider Modix Big-60 (but it will cost more!).

Questions to Answer Before Buying a Large 3D Printer

Have you considered any alternatives to buying a large 3D printer? Have you thought of the pros and cons of outsourcing the printing process? Or maybe purchasing several smaller machines instead of a large one? Before you invest in a large-format 3D printer, you might want to ask yourself the following questions:

Once you’ve found answers to these four questions, you can make an informed and conscious decision on whether you indeed need a large 3D printer.

Hopefully, this article came in handy and now you better understand which 3D printer you might want to purchase to create large-size objects. If you want a machine with a build plate of over 300 x 300 mm, you might want to choose from the following solutions: Creality Ender 5 Plus, Tronxy X5SA-500 Pro, Vivedino Troodon, Modix Big60 V3, gCreate gMax 2 or Modix Big-40. All of them cost less than $5,000 and never compromise on quality when printing large objects.

These printers might differ in their characteristics. Some of them are customizable while others are not. Some are good for beginners while others require certain experience. Some arrive ready to be used while you might need to assemble the others. The main thing is that no matter what your tastes and demands are, you should be able to buy a large 3D printer at a reasonable price. Before the purchase, you should consider whether it would be more reasonable to get a farm of smaller machines instead or outsource the 3D printing services to a third-party provider. It makes sense to buy a large 3D printer only if you’re planning to use it regularly.

3D Printers Reviews 0
It seems like additive manufacturing continues to gain momentum at an unprecedented level, with