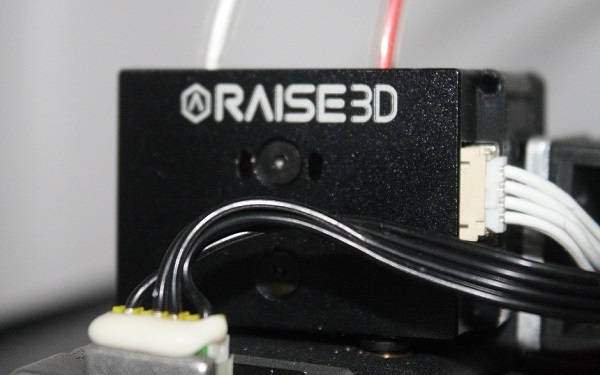 In mid-2018, Raise3D announced that it was releasing a new line of Pro2 3D printers. Everyone is familiar with this manufacturer’s N-series devices, which have proven themselves perfectly. The company itself, despite its young age (operating since 2015), has already earned a positive reputation. And the main bet is made on feedback, that is, the development work conducted by Raise3D employees in Shanghai is based on the feedback, recommendations and wishes of users of 3D printers of this brand, in particular N-series. This led to the new Raise3D Pro2 and Pro2 Plus. That’s why we will give a comparative characteristic according to the previous generation, the Raise3D N2.

Visually Raise3D Pro2 (https://top3dshop.com/blog/raise3d-pro-2-3d-printer-review) is not much different from N2. But there are some changes. The developers didn’t change the frame, but the body itself got some goodies. The first one is the door with magnets. Recall that in N2 it was fixed by a latch. The magnets are undeniably more convenient. 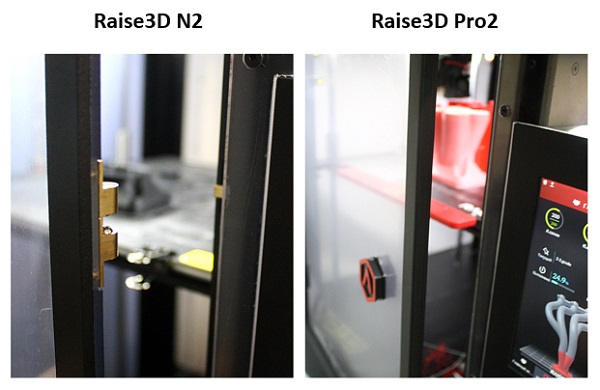 The second is that the coil compartment in the door now has holes. They are closed with plugs, but allow you to work with large reels without leaving the door open. Also a handy innovation, especially considering that the equipment is geared towards printing large products. 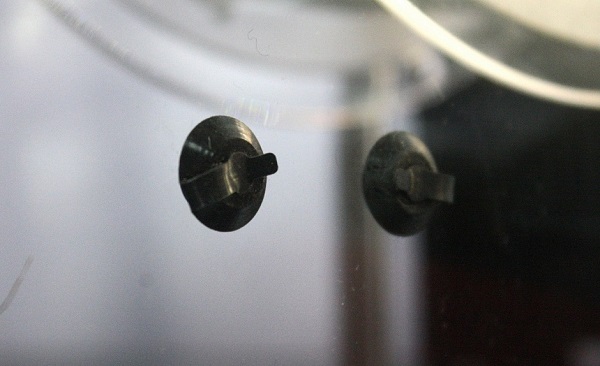 There are changes inside as well. The Raise3D Pro2 now has a HEPA filter. Now even when printing with ABS plastic, unpleasant smells are much less. 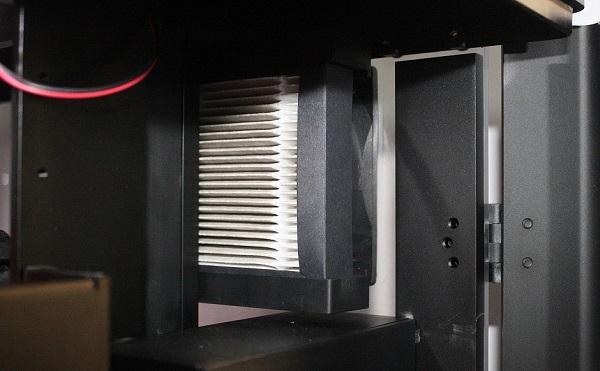 The mechanics in the N2 can be said to be perfect, so the kinematics of the Pro2 has been left unchanged, at least no key. But the limiters still changed to a more serious optical – a small step into the future. 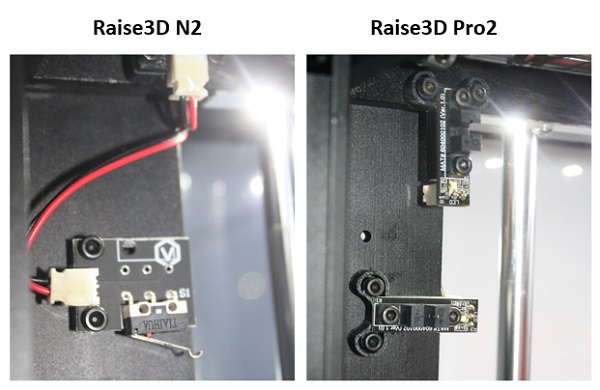 In the previous model, the table was made of glass, in Pro2 it was made of aluminum and equipped with the BulidTalk adhesive surface on top. Fixation of the table is also on magnets and additionally on screws. The pegs that the extruder could get caught on were removed. 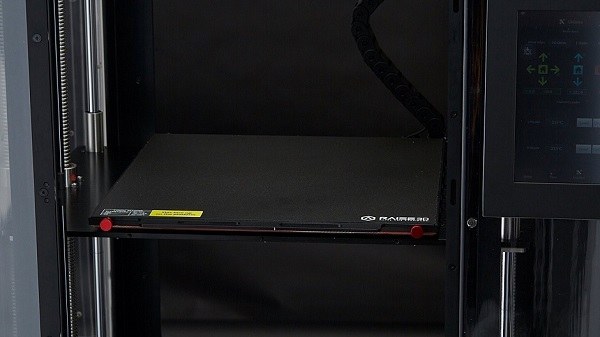 Directly in the production of each table is carefully checked for evenness. A special test is invented for this purpose, and it is printed, and its results are visible to you. By the way, you should remove them before calibration and the first printing. 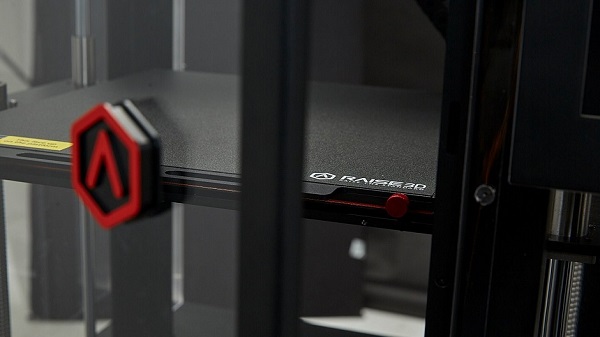 So what has changed significantly? Of course, the extruder is the heart of any FDM 3D printer. Dual-extruder printing has some distinctive problems. As I recall, in the N2 you had to position the nozzles perfectly in relation to each other, but even then the possibility of one interfering with the other, or even the model just being knocked down, was very high.

The Pro2 has a system that lifts the nozzles, which uses a servo drive. The inactive nozzle lifts just a few millimeters during printing, but even that is enough to ensure safe printing with respect to interference. 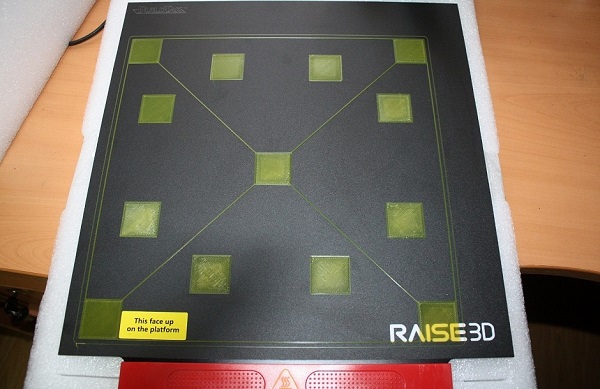 The only thing is that calibration has become a little more complicated. But this is more than compensated by the fact that the main problems of dual-extruder printing have been solved, and the system itself has become more convenient. 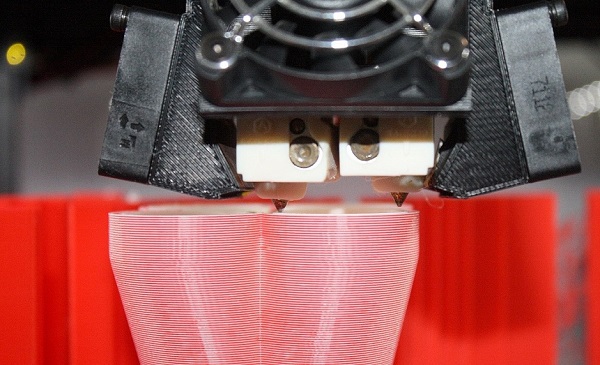 The developers completely redesigned the mechanism of plastic feeding. Parts and mechanisms managed to reduce and make it lighter. As a result, the whole print head became lighter. This change made it possible to print faster while maintaining the quality of the finished surface. Added the ability to adjust the pressure mechanism. This will simply be an indispensable feature when working with capricious materials such as flexes and rubbers.

There is a sensor at the top of the feeder that will read the presence of filament. When it finishes, printing will automatically pause. 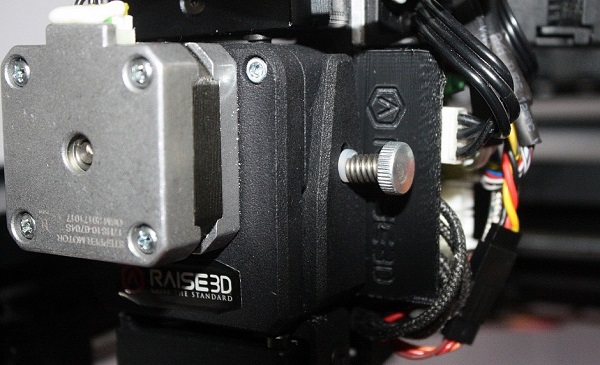 The Pro2 is equipped with a camera that allows you to remotely monitor the printing process and record timelapses.

But the developers have decided to part with the battery, although the function of resuming printing has remained, but the principle has changed somewhat. When power is off, the printer is paused, and the non-volatile memory is engaged, which, when power is turned on, allows you to start printing from the right moment. 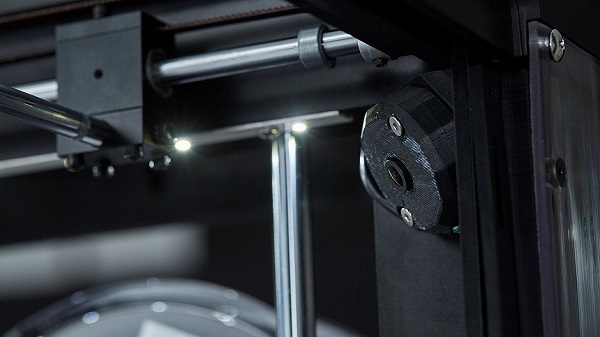 Of course, the “brains” were touched as well. All innovations required the installation of a more powerful board, which was done. As for the electronics, the figures speak better:

The Pro2 sample being tested is pre-production, so it has a large number of printed parts. In production models, they will be injection molded. The model comes from the factory with the table plane already calibrated, and the nozzle will have to be calibrated by adjusting the distance between it and the table.

You have to send the extruder “home” first, and then the table – clearly in that order. Since the “home” position of the extruder extends slightly beyond the plane of the table, even if the table is raised a little high, the extruder will not cut into it.

You can use the stylus that comes with the kit to adjust the gap. You should calibrate it only when it is cold, i.e., you should not heat up the extruder or the table.

The adjustment of the height of the table is done by means of a pin, which closes on the Z-axis of the optical stylus.

The nozzles became more difficult to calibrate. On the N2 you just unscrewed one bolt, on the Pro2 you would need to remove the fan. 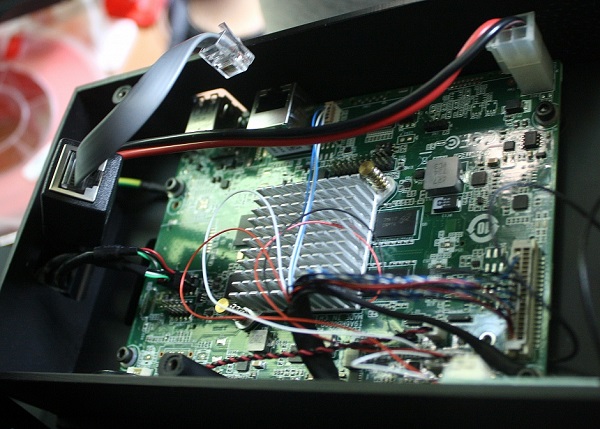 The mechanics of switching the extruders are not complicated. The eccentric extruders are spring-loaded and are servo-driven. As a result there are only two positions left to maximum or right to maximum. 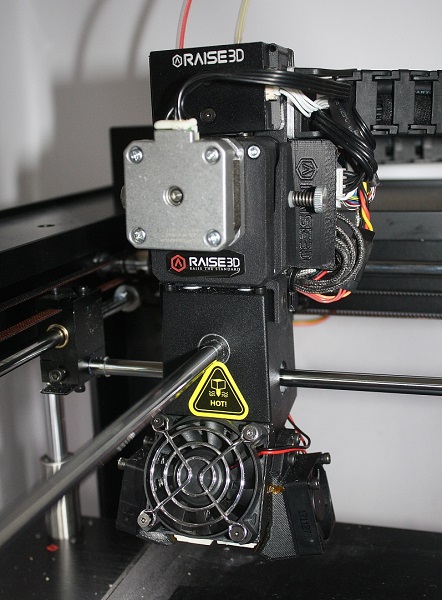 To calibrate, both extruders are first heated up, then the desired extruder is lowered down. Next, on the screen you select the extruder you want and start extruding. The bolt on the extruder is then unscrewed, allowing it to be adjusted in height. For the second extruder you do the same thing. This is how the calibration is done. 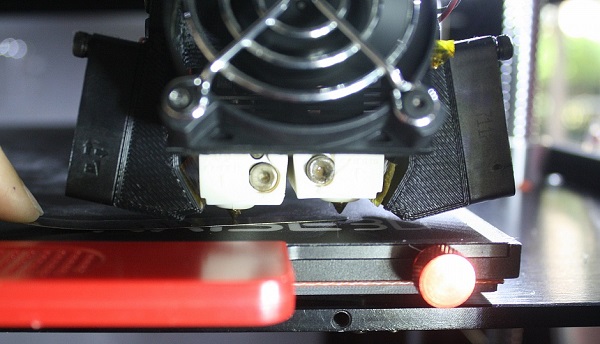 The work is done in the program ideaMaker. The software added some features and new ready-made profiles, as many users prefer to use ready-made settings. In particular, the new profile – “ultra quality” will allow printing with a layer thickness of only 0.05. 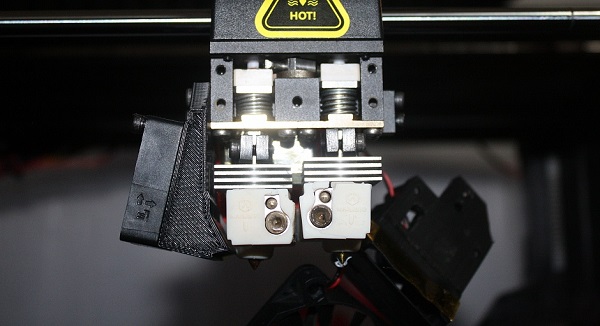 Another useful feature is the auto-alignment of models in two-color printing. Previously, this task had to be done manually. 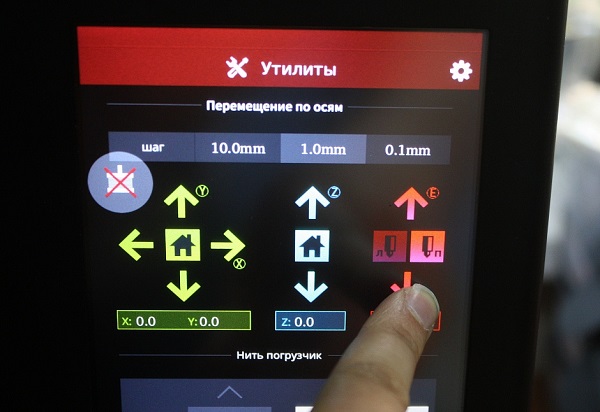 Fine tuning is also available. There is an acceleration factor. It is possible to ungroup the models on the table and then print them simultaneously, but to set different parameters for each, including the thickness of the layer. 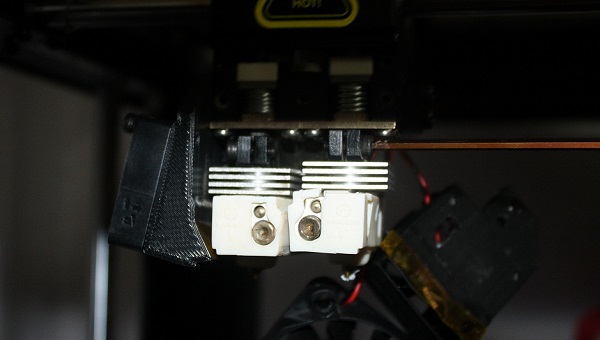 The Pro2 on-screen menu also has new options – additional settings, including acceleration, extruder offset, and others. When printing, these settings will be higher in priority than those of the slicer, and if you’re using multiple 3D printers, the setting can be done once and not bother with the constant preparation of the file. 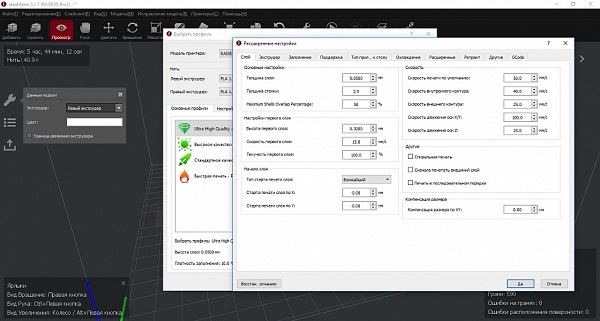 I used the original Raise brand plastic for testing. The print quality was excellent.

During the printing a soluble plastic for supports, PVA, was used. Since the main purpose of the Raise3D Pro2 is industrial, we used it to print cases for boards and screwdriver batteries, but we also printed toys, vases and other small items.

The Pro2 coped with all the tasks flawlessly.

To summarize…
So, Raise3D Pro2 is really made on the base of N2. All the significant wishes and comments from the customers were heard, which is very nice. In general it is nice to know that the feedback works, because the Pro2 is actually more comfortable than its predecessors.

With the Raise3D Pro2 it is possible to modernize production, make it more modern and efficient, and reduce the cost of launching new products. That’s what this 3D printer is all about. You can control the equipment remotely. You can connect several devices into one network, thus creating a 3D printing “farm”.

In general, Pro2 can be used in any production. It can print prototypes, mock-ups, finished models and products. This professional printer is also distinguished by its relatively affordable cost, which even small companies can afford.