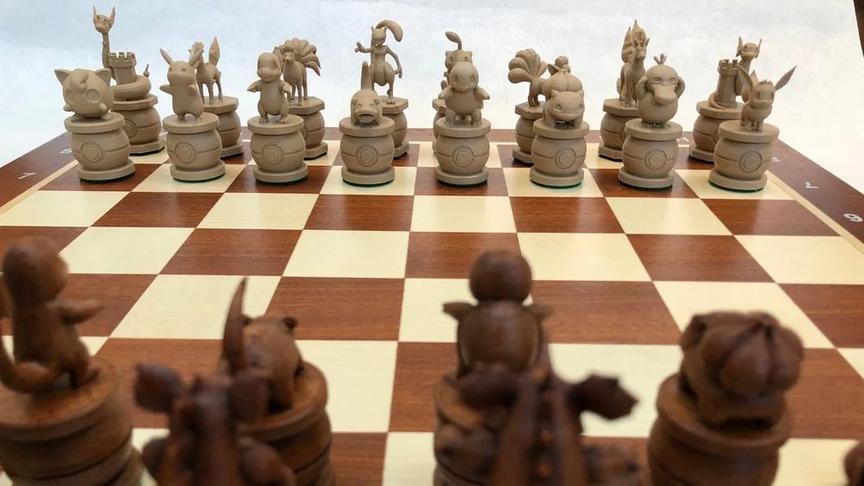 The capabilities of modern 3D printing allow you to reproduce almost any part on a 3D printer, regardless of its complexity. You can even create a real board game – chess, printing not only the figures of any configuration, but the board itself. Three-dimensional printing of chess will certainly be of interest to users who are fond of this game, or those who know chess players.

3D-printing technology involves layer-by-layer creation of parts by applying thin molten plastic filaments. The consumable material is one of the appropriate filaments – ABS, PLA, Nylon, etc. For chess printing, 3D printers that print using FDM technology are more suitable, including the most budget-friendly ones. More expensive models, which use photopolymer curing method, are used in the home much less frequently because of the relatively high cost of production. However, such devices are also suitable for creating original chess sets.

Before you start printing, you should develop a 3D model of the product – a file in STL format, which the printer’s control unit can recognize. The model is a set of instructions written in a special program language, according to which the three-dimensional object will be printed.

You can make a 3D model of the chessboard yourself using special programs and online services, including 3DS Max, Maya 3D, Blender, Cura, CraftWare, TinkerCAD, Sculptris, and others, or by downloading a ready-made model from specialized sites. Some versions are available free of charge, some need to pay in advance.

There is also a mixed version when your own, customized design is developed on the basis of the ready-made free project.

One of the most extensive categories in 3D printing is recreating chess sets with figures from movies, TV shows or cartoons. By printing out one of these sets, you can have truly memorable battles with your friends.

Pokémon. This chess set is based on characters from a popular animated series. The abundance of characters allows you to create unique sets: for example, you can make the king and queen Brock and Misty, and replace the rest of the figures with your favorite Pokémon. Basic shapes are developed for each type of figure, allowing you to distinguish pawns from rooks, etc. The recommended layer height for printing is 0,15 mm and the fill factor is from 20%. 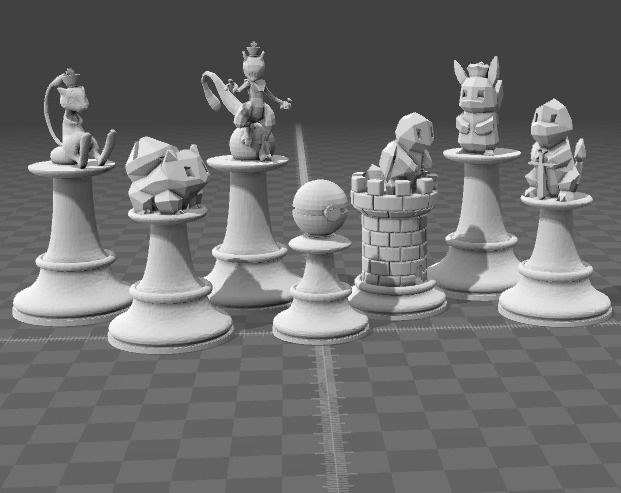 The Lord of the Rings. Tolkien’s iconic saga about the adventures of the characters of Middle-earth is a good idea for a stylized chess set. This set has enough pieces to arrange a large-scale battle between good and evil. The light side here is represented by figures of hobbits, dwarves, elves, etc., while the dark side is represented by goblins, orcs, Saruman, Sauron, the Nazguls, etc. Printing can be done without supports, with a fill rate of 25% or more.
Star Wars. Another set that, when printed, can affect the struggle of light and dark forces. The figures here are represented by Stormtrooper Pawns, R2-D2, Han, Leia, Yoda, Darth Vader, Lumia, and other iconic characters. It is recommended to use PLA plastic with sleeves from 3 to 16 and an occupancy rate of 15% to print this set. Support structures can be used to improve print quality and detail. 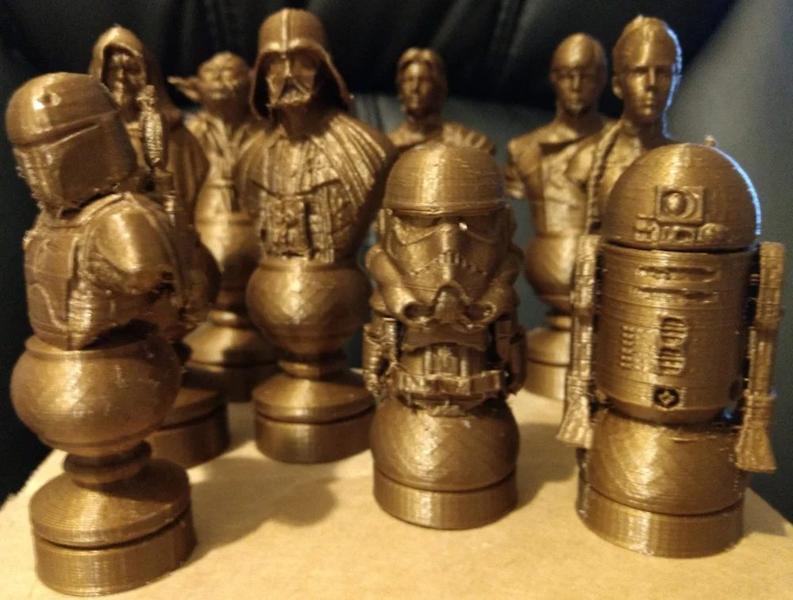 Super Mario. Super Mario – the iconic computer game from Nintendo, which has conquered millions of gamers around the world. Possibility of three-dimensional printing allows you to print a chess set, where the main characters are the characters of this story: Mushrooms, Yoshi, Queen, Peach, Mario, Birdo, etc.
Counter Strike. A set of chess pieces based on this game will allow you to have a really hot battle with friends outside the virtual world.
Maincraft. The game’s retro graphics have captivated billions of users around the world. Using a 3D printer, you can recreate this universe made of blocks and in the form of a chess set.

Low-Poly. A distinctive feature of this chess set is the low-polygonal design, which is a set of three-dimensional shapes built from flat polygons. This feature makes the figures fairly easy to 3D print, allowing them to be printed with a high level of detail. The kit components are designed in Blender, and the ideal plastic for printing is PLA. Most of the figures can be printed without first creating support structures, only the knight and king figures may require supports.
Ravenous. A distinctive feature of this set is the use of the Voronoi structure for each chess piece – the structure is designed so that the mathematical construction of the planes results in circular three-dimensional structures, similar to webs. Printing such a set requires minimal cost due to the hollow structure of the pieces. PLA plastic and 15% fill factor are preferred for printing. 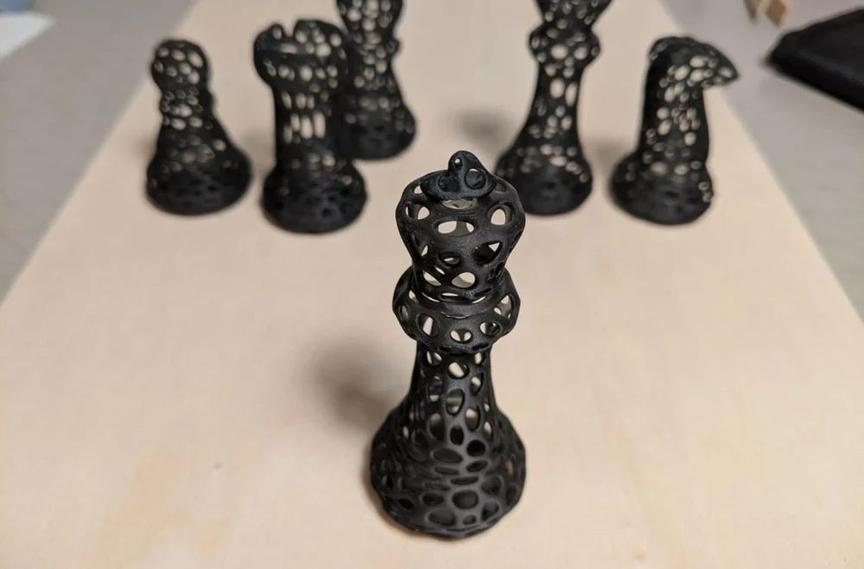 Abstraction. This chess set will be an excellent choice for those users who prefer abstract design. The figures in the set have a unique structure and a ball located at the top. It is designed to indicate the type of figure. The printing of this set goes better with the use of support structures, but it is important to remove them extremely carefully after the printing is completed: the figures are quite fragile.

A set with animal figures. The set can include any animal, including – lion, poodles, horse, penguin, cat, etc. A unique design is developed for each type of figure, especially for the lion, who plays the role of king in this party. He is distinguished by his regal mane and the crown on it. It is recommended to print such figures without rafts and support structures with filling more than 20%.
Space Race. This set is dedicated to the time of the Cold War between America and the USSR. The figures here are represented by various projects of spaceships and satellites. Almost all types of figures can be printed without support structures with more than 15% fill rate.
Musical set. Depending on the imagination of the creator, the set may include pawns in the form of music pairs, as well as a set of musical instruments – violin, cello, harp, guitar, etc. This project also involves printing a collapsible board, which is convenient for storage, as well as a special box.

Bauhaus. This chess set was designed in the Bauhaus style, which embodies all the beauty and aesthetics of minimalism. The prototype of the set was Joseph Hartwig’s Model I chess set, which was created in Germany in 1922. It is recommended to print with more than 25 % filling and 0,15 mm layer height.
Steampunk. This literary genre is a symbol of industrial society and its advanced technology. The style combines aesthetics and technological beauty. The model is easy enough to print on printers with FDM-technology. 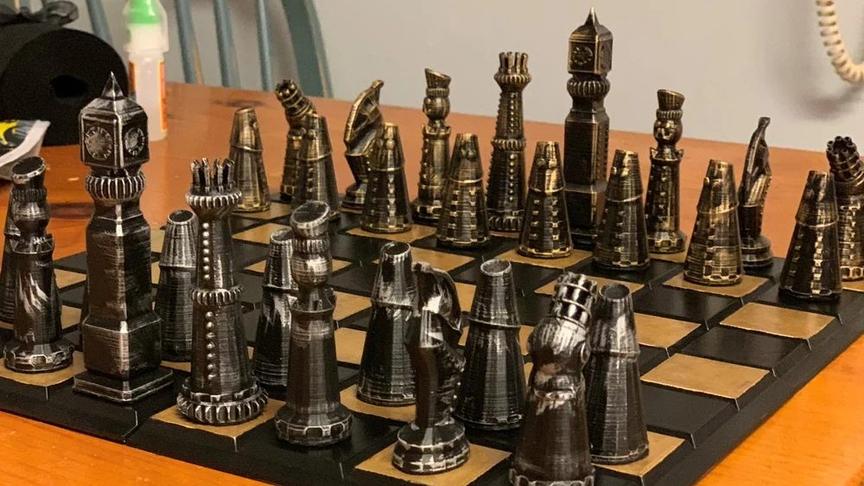 Chess set in the form of succulent pots. This chess set is an opportunity to combine the game of chess and gardening. The chess pots here are hollow containers, in each of which a living plant can be planted. PLA plastic thread is suitable for printing.

In addition to chess sets with standard solutions, there are unusual pieces, the game of which requires developed spatial thinking and interaction skills.

Collapsible board for the game. This project involves printing a collapsible board for playing chess. It is suitable for travel, camping and similar situations. The board consists of parts which can easily be connected with each other, and after disassembly, can be folded into a compact box. For printing, PLA-plastic with more than 20% filling is mostly suitable. Supporting structures are not needed in this case.
Chess set for playing in threes. The board in this model has the shape of a curved hexagon and is designed for playing in threes. Each player in this case gets 16 pieces. The optimal size of the board is 180 × 180 mm. 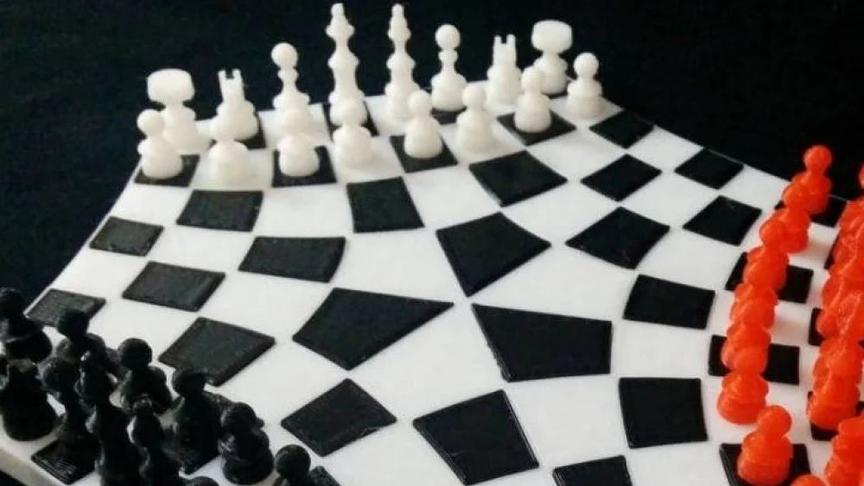 Board with expansion possibility. This model consists of one standard picture that can be printed unlimited times, which allows you to create a chessboard of any size. In this case is printed only half of the squares, which significantly reduces the consumption of material.
Three-dimensional chess. Version of chess for advanced players. The game board has five planes, each of which has an area of 4 × 4.

Which 3D printers are suitable for printing chess sets?

Almost all FDM 3D printers are suitable for printing chess sets with a custom design. The presence of two self-contained extruders in a model is a serious advantage, as it allows you to print supporting structures if necessary, as well as to use multicolor printing.

Print quality depends not only on the brand and quality of the printer, but also on the user’s ability to customize and refine the printer.

You can easily print missing figures if you lose them. It is quite difficult to order duplicate figures in the store, especially if the chess model is already out of stock.
It is possible to print chess pieces in any size – from the smallest, pocket versions to large, floor-standing designs.
A chess set with a unique design is an excellent gift for chess players you know. In stores, as a rule, you can buy only standard sets, whereas with the help of three-dimensional modeling you can develop a unique set, which exists in a single copy. 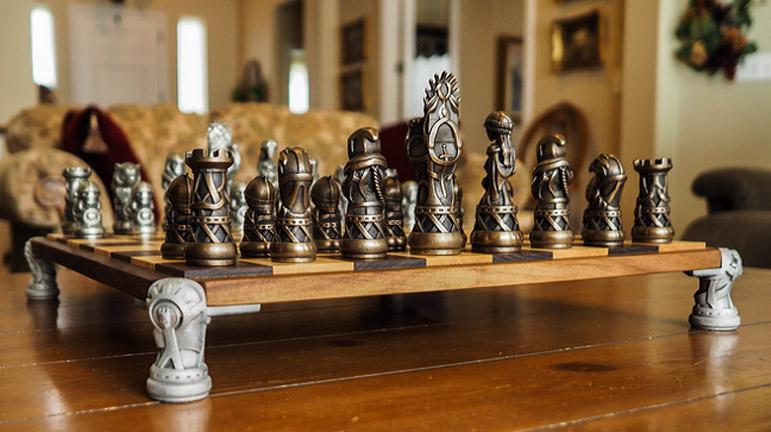 Self-printing chess on a 3D printer does not require specific knowledge and skills. However, at a minimum cost you can get unique chess sets that only you will have.