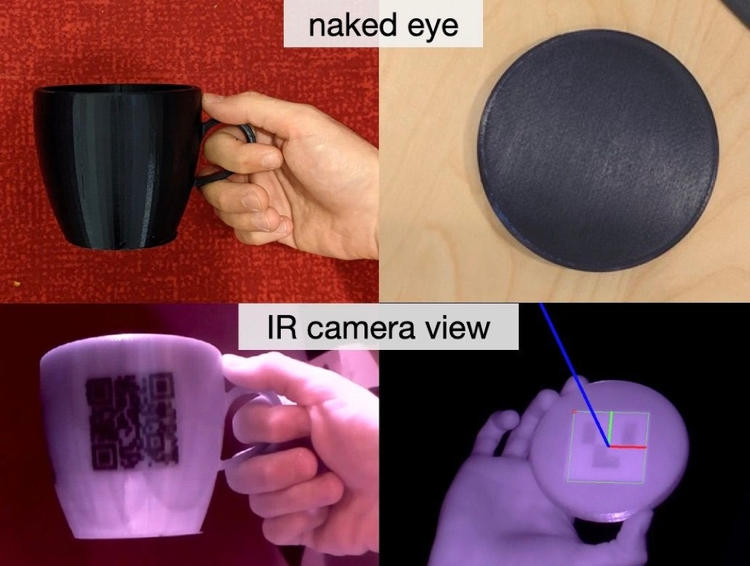 A group of MIT engineers led by Mustafa Doga Dogan, a graduate student, has developed an alternative to the barcode and QR-code that are widely used today. The new version of InfraredTags are applied to various objects by means of a 3D printer and remain invisible to the naked eye.

The head of the research group said that the idea for the invention came to his mind when he heard about a new smartphone with an infrared camera. The basis of the invention is a plastic material designed for 3D printing, which transmits infrared light but remains opaque in the visible range. Two variants of creating graphical codes using this technology are proposed.

In the first variant the alternation of zeros and ones of a binary code is encoded using the thickness of plastic. The second variant envisages the usage of two kinds of plastic in one code: transparent and opaque in the infra-red range. The author of the project considers the second variant to be more preferable because the picture is read by an inexpensive ($20) infra-red camera and the use of two types of plastic provides a higher contrast of the image.

Engineers have put graphical codes InfraredTags on a cup and a router – depending on the angle you can read the name of the network or a password. In addition, the developers showed a prototype of a game controller: it has the shape of a puck, on the surface of which is applied a graphical code, by the geometric distortions of which you can determine the angle at which this controller is turned.

In practice, InfraredTags codes can be used on various devices that are controlled by smartphones; they can also work together with augmented reality glasses, for example, when selecting goods in retail stores.