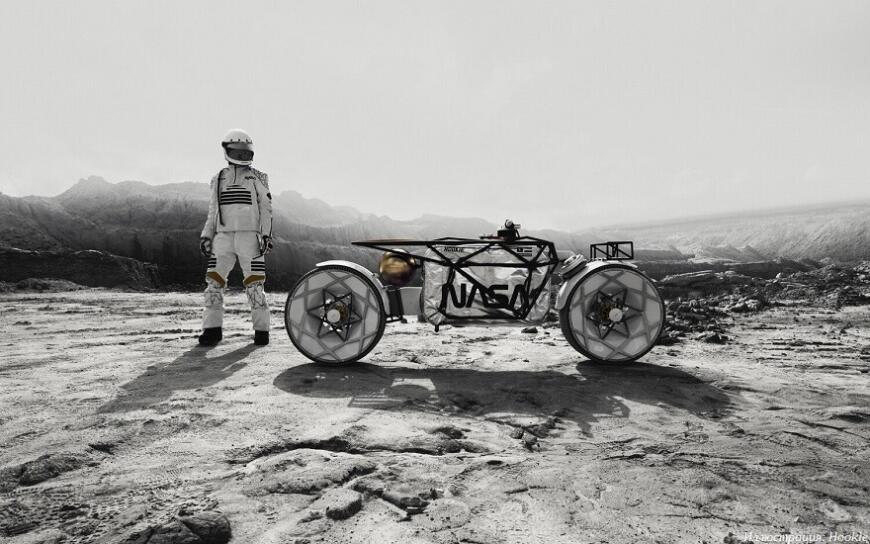 German motorcycle enthusiasts created a concept for a lunar motorcycle based on sketches by a Russian designer and brought their creation to an exhibition in Los Angeles. This bike features fly-by-wire control, 3D printed tires, and a rather uncertain future.

The author of the concept is Russian designer Andrei Fabishevsky, who published sketches of the “NASA motorcycle” in November last year. At that time, Andrei could hardly think that a year later someone would embody his idea in aluminum and plastic. Still, it did happen. The project was implemented by guys from the Hookie motorcycle studio in Dresden, who named their version of the lunar motorcycle Tardigrade — slow but unusually tenacious microscopic organisms that can survive even in outer space.

It appears that the motorcycle is on the move, but it is unlikely to ever go to the Moon as it is too “earthly” in technological terms. It was based on the Cake Ösa electric bike; the batteries, motor, and wheels were purchased from the Swedish company Stromer. Some of the parts were 3D printed, including unusual lightweight carbon-filled polymer tires. The possibility to use carbon-based materials is associated with professional 3D equipment, and the printer must meet certain requirements for this. For example, the Raise3D E2CF specializes exactly in this field, as is clear from its name. Perhaps the most interesting point about the motorcycle is the fly-by-wire steering system: signals are read from the handlebar and transmitted to the electric drive, which controls the deflection of the front wheel. Thanks to this design, the bike can be quickly disassembled for easy transportation. By the way, it weighs 134 kilograms.

The Tardigrade can scarcely be considered fast — it develops 15 km/h, with a range of 110 kilometers. Faster is not always better. Lunar rovers used by American astronauts had a standard maximum speed of just 10 km/h, and not because they couldn’t go faster. The record is almost twice as high, but at such speeds and in low-gravity conditions, light electric vehicles flipped on Moon’s bumps when trying to turn. So, the Russian saying “the quieter you go, the further you’ll get” is quite relevant here.

Now the lunar motorcycle is on display in California: the authors of the project received an invitation to present their creation at an exhibition in the famous Petersen Automobile Museum.